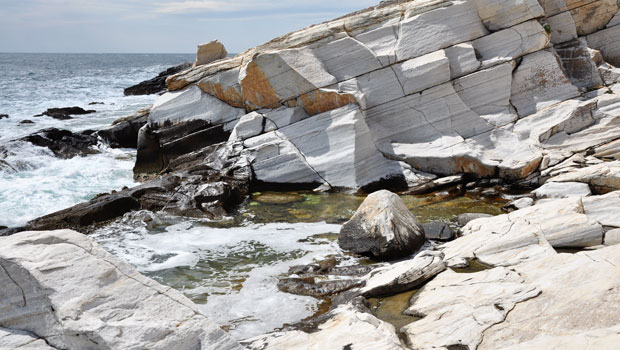 The history of ancient marble quarrying starts at 6th Century BC in Thassos island, introduced by Parian marble crafters (Paros island had developed already quarrying methods and techniques in the Lichnites quarries). Main quarrying area was the east side of Alyki peninsula, where the visitor can admire today the astonishing sight of the old quarries, either on a panoramic view from the top of the hill of Alyki or on a perimetrical view by boat. The ancient quarrying spots – with the aid of the waves that polished the stone – have created small natural ponds and pools, where white of the stone and the wave’s foam contrast on blue of the sea and the sky.

The ancient quarrying operations lasted about 12 centuries – up to 6th Century DC. During this period an enormous amount of marble artifacts have been excavated, processed at site and exported by boats to all places of known world – from Acropolis of Athens to Rome’s Coliseum. Marble and its products was the first ambassador of Thasian cultural heritage to the rest of the world. Likewise, modern quarries extroversion create synergies for the promotion of other local products such as olive oil, honey, as well as tourism itself.

Ancient quarries were -just like today- small private enterprises. In Alyki area, it is estimated that about 10 – 12 such businesses have been operating, having among themselves natural boarders. Each quarry was operating in an area between 1 – 10,000 m2 (maximum 100,000 m2 in today’s quarries). A large variety of specialized and skilled personnel was employed in these quarries – from the quarry master (who was responsible for the selection of the stone for each artifact), to the excavation team that was expert in the use of the proper tools, to the handcraft marble technicians, to the transportation and loading team, to the team of producing and maintaining of wooden and iron tools. It is estimated that about 10-50 people was employed in each quarry, an employment level that is common in today’s quarries as well.

Contrary to today’s quarrying practices – that priority goes to the rational and scientific exploitation of the reserve for maximization of the yield and minimizing waste – ancient quarries were excavating marble upon order. Quarry master was ‘searching’ for the proper spot for excavation of the stone to fulfill his order, based on the dimension and volume of the order, and restrained by the cracks and quality characteristics of the available surface reserves. The stone was excavated utilizing the natural cracks whenever possible, and riddling with brads and wedges the solid sides.

Unlike today’s practices, the stone was largely shaped in the quarry according to the order. The curving of the stone was done on site, and the columns, the capitals, the copestones and the other artifacts where almost completely cut-to-size and curved, by specialized teams, before loaded to the boats for delivery to the project. The only works remaining would be minor curving required by their installation, and possibly artificial coloring.

Most of the tools used in the ancient quarries, are still used today, especially for the partition of large solid bodies. These are the plumb, the canon, the meter, the compass, the strand and color for markings, the brads, the wedges, various sizes of levers, hammers of all sizes. There were tools that no longer exist today and these are specially shaped hammers for shaping, crab winches, and wooden and iron rollers for the transportation of the blocks, the products and the wastes.